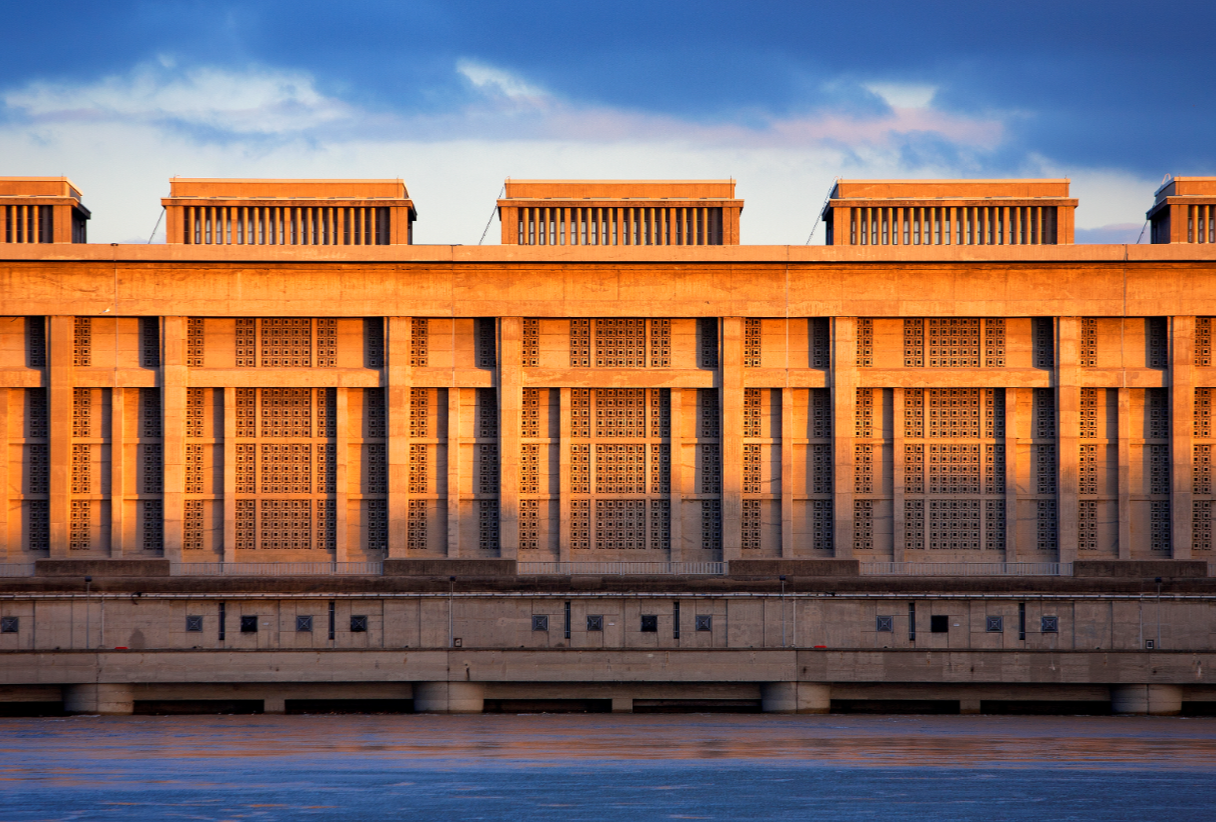 The hydroelectric dam at Bollène opens to the public

You can now come and explore Bollène’s historic hydroelectric power plant on the Rhone river! This masterpiece of industrial architecture was one of the last massive infrastructure projects to be built in post-war France. Commissioned in 1952, it boasts a gigantic turbine hall bathed in light through the geometric lattice of openings in its imposing Art Deco façade. Both are listed as Historic Monuments and can be visited during the newly launched 2-hour tour.

Bollène’s hydroelectric power plant was built as part of the reconstruction of France after the Second World War. The gargantuan project was undertaken by the Compagnie Nationale du Rhône (CNR, “National Company of the Rhone”), a State-sponsored operator that had managed the river since 1934 with three key remits: to generate power, facilitate navigation, and irrigate agricultural land. It was a phenomenal construction project that brought together up to 7,000 men from all over Europe, and was completed in just four years, from 1948 to 1952.

The ambitious scheme involved diverting the Rhone river over nearly 30 km – between Donzère and Mondragon – to build Europe’s most productive hydroelectric power plant at the time. It also broke the record for the highest lock in the world, with 6 turbines that brought electricity back to a part of France that had desperately lacked it since the war years.

Architect Théo Sardnal gave the building a particularly beautiful exterior. Drawing inspiration from Provence’s omnipresent Gallo-Roman architectural remains, he broke up the regular design of his façade with a linear pattern of pillars and claustra. This unique aesthetic earned the power station a listing among France’s Historic Monuments in 1992. It was officially inaugurated in 1952 by President Vincent Auriol.
As well as a dam, hydroelectric power station and lock, the facility now also comprises two photovoltaic solar plants and a wind farm.

Today the plant is still producing almost 2 billion kWh/year – enough to supply 815,000 households with energy for a whole year.

CNR has designed an experience that shows people how we harness renewable resources to generate electricity, and also showcases an extraordinary monument of industrial history that played a part in building France’s energy capacity and is now contributing to the country’s energy transition.
Over the course of the 2-hour guided tour, visitors can discover:
An outdoor circuit that gives a close-up view of the lock with its massive curved gates, and an explanation of how they work. You also enjoy exceptional views over the Rhone, the hydroelectric power station, the wind farm and the photovoltaic plant.

An indoor circuit, including:
An expo area dedicated to the history of CNR and the facility with photos, videos, and 3D models
An interactive gallery where visitors learn the science behind producing renewable electricity
A dizzying view down into the amazing turbine hall
A visit to the former control room, unchanged since the days it was operational, and now listed as a Historic Monument.
You’ll learn a lot during this fascinating tour covering an area of 600 sq. metres.

TEMPORARILY CLOSED DUE TO COVID-19

Visitors must reserve in advance: www.lescircuitsdelenergie.fr
Opening days and hours:
From 10am – 6pm
For groups and schools: every day, depending on availability, until mid-December
For individual visitors: every day from 1st April to 31st October
Wear comfortable clothes and closed shoes, such as trainers/sneakers (mandatory).